Over the past couple of months, I'd been reviewing the various works based on The Untouchables, the team of Prohibition agents gathered by Eliot Ness to take down Al Capone and his South Side Gang.  One thing that kept popping out, whether it was from the 1959 series, the 1987 movie, or the 1993 syndicated series - the biggest problem of the era was corruption, not alcohol.

This is going to be my impression of events, past and current.  I may have things wrong.  The source of the problem was lawlessness, but the problem was money.  It's a problem that's still around, maybe worse today.  Time to dig deeper.

A couple of years ago, I created Demona using the Demon Hunters RPG.  I mentioned that I wanted to get the more recent version of the game.  Well, I have the most recent version.  Let's see how Demona looks in the new edition, Demon Hunters: A Comedy of Errors.

It's been quiet around here.  I hate summer.  And record heat and humidity.  It makes doing anything difficult, even thinking.  The heat and humidity just drain you of energy.  Summer sucks.

On to the meat of the post.  A recent thread over at RPG.net, "The worse tropes in modules/scenarios that new writers should really avoid", had me thinking.  Shadowrun and, to a lesser degree, Cyberpunk 2020, especially in published adventures, tended to have the PCs betrayed by their employer in one way or another.  It's not as bad as it used to be, but after the first betrayal, the players aren't going to trust anyone who hires them.  This is a problem.

Finally found some sliver of time to get back to painting.  The past bit has been either busy or oppressively hot.  With a break in the heat, I started the modron.  Since this is pic heavy, the post will continue after the jump break.

It's been a bit.  The last time minis appeared here, I was planning out how to paint some modrons.  I haven't started yet, but there's some motion.  My work week is shifted back a day, so Tuesday to Saturday.  During my workday on Saturday, I received emails that the paint I ordered for the monodrone was arriving and, later, had arrived.  During my first break, I checked the front door and found the package.

It's been a couple of weeks, but here's how the security levels play out during a heist.  I'll assume a pure cyberpunk approach and point out where the magic from Shadowrun can make a difference.  If you need a refresher, check out parts 1 (the levels) and 2 (the responses).

Meet the crew, one I was going to use for a Shadowrun story that needs some work before I start.  Skater is the group's hacker; she uses skating metaphors to get past the Intrusion Countermeasures (or IC).  The Chrome Rainbow is the team's cybernetically enhanced combat expert, a street samurai if you will.  Hudson is the getaway driver, one with the car.  Tempest T. Pot, the team's face and dealing with a few personal issues.  And for Shadowrun, Datalore, a mage who uses detection spells.

The crew gets hired to break into a corporate facility to remove a MacGuffin that Mr. Johnson wants.  Mr. J has added a "no killing" clause to the contract, so the crew wants to get a better idea of what they're walking into.  Skater and Tempest, being the least likely to draw casual attention thanks to a low amount of cyber installed, are sent to the facility during an open house of job seekers.  Between the two of them, they make note of the security guards around, which are mainly the first level, obvious but lightly armed, the security cameras, and get copies of employee IDs to check later for security tags,  Skater and Tempest leave after spending the entire time under the watch of guards and trying to fit in, and report back to the rest of the crew.  In Shadowrun, Datalore stays back; the crew assumes that the corporation will have someone scanning the astral and mages are rare enough that one walking in will be noticed.

A day and a half later, the crew has a plan.  Mr. J has given a general location of his MacGuffin and everyone has less-than-lethal weapons like tasers and stun batons.  Skater has done some more homework online and has a map of the facility's grounds, including entrances.  She has also given the crew modified security access to use to get through doors.  The access won't last long, but they just need to get inside.  The door near the facility's parking lot responds to the stolen security access, and the crew enters.

The crew has a plan.  Skater and Datalore will go grab the MacGuffin while the rest of the team pretends to go after another target with the intent to fail.  They're not getting paid for stealing a second item.  Skater is prepped with the needed props, a copy of an IT work order.  Datalore will look at the work order from time to time.  Tempest, Chrome, and Hudson make their way through the facility, staying in touch with Skater and keeping close to exits and not going too much deeper.

Team False Intrusion eventually trip an alarm.  The security station sends out drones to locate the intruders, followed by several human guards a few metres back.  Without Skater to hack into security's radio encryption, Team False Insertion doesn't know that theyve been discovered.  However, that is part of the plan.  When the drones appear, Chrome throws one into a wall, guaranteeing the security control knows where they are.  The human guards take up posiition and tries to stop TFI.  Chrome's reflexes allow him to tase two before they can react, and a quiet foot chase begins in the facility.

Skater arrives at the location where the MacGuffin is.  She hacks her way into the secure room, but notes that the lock used is something she has seen where there is more security.  Yet, there isn't thing here, no drone, no camera, no tripwires, nothing.  Inside the secure room, she finds the MacGuffin and notes that it's older than she expected.  Again, the security surrounding the MacGuffin is off.  Tight but not.  Skater gets what she came from and lets the rest of the crew know.  Datalore checks for magical security, but magic and tech don't play well together, and the room is almost a storage space for tech gear.  While Skater does her work, Datalore magically keeps an eye out for security passing outside.

TFI is still dealing with security.  On the part of security, they're noticing that they're not being killed.  Security control makes the choice to not call in heavier troops.  With TFI withdrawing, security decides that pushing the intruders out is enough; going for an arrest may turn the intruders violent and they're not getting paid enough to be killed.  TFI escapes, leaving a number of tased and confused guards behind.  Hudson gets his car going and the crew escapes with what they came for.

If Mr. J. was after something else, say a weapon prototype, the crew may have run into high levels of security who might not have bothered to warn them before opening fire.  Security, though seemed light, leaving the crew wondering just what Mr. J. wants with the MacGuffin.  Skater takes some notes so she can follow up after exchanging the MacGuffin for the crew's pay.

Friday, over at Psycho Drive-In, The Live-Action Adaptation.
Saturday, over at The Seventh Sanctum, hiatus week.
This weekend, Renaissance Press is holding a virtual convention.  I will be on a panel about adaptations Saturday at 4pm Eastern. 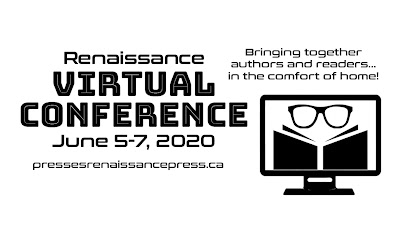 I will be on a panel at Renaissance Press' Virtual Conference.  The conference runs June 5-7, registration is free, but panel space is limited due to technology.  I will be on the panel, "Why the book was better... and why it wasn't" Saturday at 4pm Eastern.  Check out the rest of the panels to see what else looks interesting; I've signed up for a few already.  There will also be a vendors room through Discord.

I haven't been able to get back to painting minis again.  Between heat and an attack of gout, I've had other things on my mind.  I did find some day-glo orange paint online, so I've ordered it to use with the modrons and possibly other uses, such as magical effects like /fireball/ spells.

I'm still working from home.  No word yet on when that will change, so I'm assuming that I'll still be sheltering-in-place until at least the end of June.  Better be safe than be sick.  But whoever said residential neighbourhoods were quiet never lived in one, especially one filled with toddlers and yappy dogs.

To close out, have a melted kitty.


Today, over at Psycho Drive-In, Scooby-Doo.
Saturday, over at The Seventh Sanctum, The Live-Action Adaptation.

About the Chaos Beast

This blog will ramble quite a bit as I explore a variety of subjects, not limited to writing, gaming, and general interest.
Note: I've turned on moderation on older posts, to limit spammers. You can still comment on posts older than a month, but there may be a delay.
The European Union recently enacted laws that protect the privacy of visitors. I, personally, use no cookies on this site. Any and all cookies are set by Google, who should have their own notice up here, on how they collect data. I don't have AdSense active on this site but Google Analytics does examine visitor data.